Depending on the sensitivity of the human eye, we are more or less sensitive to colour variations. MacAdam ellipses were established so that chromatic variations, between any two points inside a given ellipse, are not visible to the human eye.

Around the black body curve of white light, the Standard Deviation Colour Matching (SDCM) system describes various sizes of ellipse based on the MacAdam ellipse – step 2 for dimensions multiplied by two, and so on up to step 7. These MacAdam ellipse steps are used in defining the photometric code for lights in industry standards.

As LED production is a complex process, it is impossible to make LEDs that are all identical. To guarantee identical LEDs in a given run, LED manufacturers sort their output by light intensity and colour.  This is called “binning”.

However, the manufacturer’s goal is to sell all the LEDs. Manufacturers therefore offer three levels of sorting, in steps from 2 to 7. And prices are of course not the same! To guarantee consistency across its production and the quality of lighting effects, LEC uses the narrowest sorting step which is 2. It is the only way to guarantee lighting uniformity. The bin chosen is of course on the black body curve. 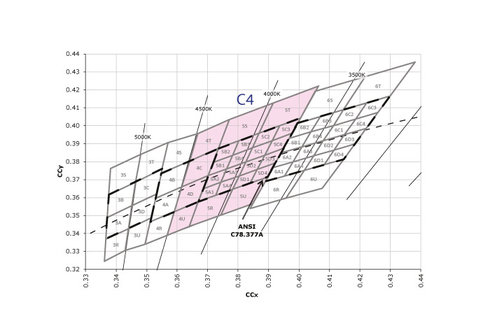 Binning of white around the black body curve © Cree

In the world of lighting, it is currently accepted that colour temperature is used to define a white. Given traditional sources with very broad colour sorting, it was quite adequate. But with high-quality LED manufacturers, it is insufficient. It is not enough to specify colour temperature – which represents the horizontal spread in a colour triangle – you also have to indicate the vertical spread. As there are colour differences in both directions, you have to specify the chromatic coordinates by bin width.

The 5 whites used by LEC are: