The Principles of LED

What is an LED? How does it work, and what kinds are there? How do you get colour and white?

A Light-Emitting Diode (LED) is an electronic component with two contacts. When electricity is applied, it emits light.

How an LED works

An LED has a standard electric diode architecture with:

Polarizing the diode beyond a certain level, called the threshold voltage, makes the unit able to pass charge, and the charge carriers (electrons and holes) become mobile.

This produces an electric current along the diode. When current flows between two zones of the semiconductor, an electron‑hole pair recombines at the junction of the two zones.

The essential difference between a standard diode and an LED is that an LED uses a material that causes this recombination to emit radiation (in this case light).

Extremely stringent controls on manufacturing processes in the microelectronics industry now produce materials whose atoms are perfectly aligned. This virtually faultless regularity of semiconductors along with many technological optimisations, allows LEDs to suppress losses and achieve high efficiencies (up to 200 lm/W off a production line, and up to 303 lm/W under laboratory conditions). 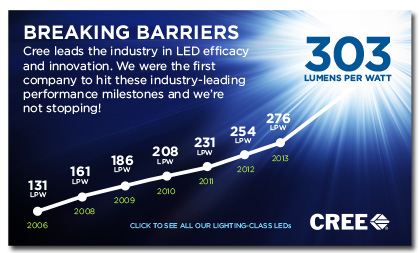 Along with performance improvements, LEDs have benefitted from advances in electronics over the past 30 years in the field of colour. Initially restricted to red and amber, the emergence of new materials has opened up vast colour possibilities. Diode substrates now include:

As you can see, LEDs are a highly technical component that have benefitted from every advance in microelectronics over the past 50 years. LED advances have totally disrupted the traditional lightsource industry. However, to fully benefit from its potential, we have to separately optimise every element involved in the process, including power supply, lens technology, thermal aspects, and the rest...