How is the luminous efficacy of a lighting system measured?

Not long ago, we all chose lights by specifying the number of watts we wanted. We all knew about incandescent lamps, the technology had not evolved much over the years, and “watts” were a sufficiently meaningful measure in those days.

However, since the emergence of powerful diodes in the early 2000s, the reference units have changed in both architectural and everyday applications. So what reference unit for lighting should we use now, to be compatible with all technologies?

From Watt to Lumen/Watt

With the increase in output efficiency, what counts is the ratio between luminous flux expressed as lumens (lm), and power expressed as watts (W). In terms of the lumens-per-watt (lumens/watt) that they deliver, LEDs have left traditional incandescent and even halogen lamps far behind as LEDs are over 10 times more efficient. With the technological development that LEDs have enjoyed since 2000, LEDs have now doubled the energy savings of fluorescent lamps and even of discharge lamps.

To encourage “green” solutions, lawmakers are promoting the use of systems with higher lumen/watt ratios; for example, the European Energy Savings Certificate (ESC). Recent legislation has also clarified the definition of the lumen/watt ratio by specifying that :

Thus, lumen/watt is a true measurement scale for comparing lighting systems. LEDs require lenses that absorb a significant percentage of the flux. However, with their outstanding efficiency, LEDs are doing well in these stakes.

A lighting design defines objectives in terms of quantity of light on things or surfaces. The objectives specify the degree of uniformity and minimum illumination requirements. This is luminous flux expressed as lux (luminous flux per unit area).

In this context, considerations of energy savings must go beyond lumens-per-watt (lumen/watt) in favour of lux-per-watt (lux/watt). The required result is expressed as luminous flux per unit area and not just the amount of light coming from the source. For example, the lenses used for LEDs reduce the luminous efficacy (lumen/watt) of a given source by about 15% but, thanks to their ability to focus output, actually increase light intensity expressed as lux/watt. Lighting systems that are identical in lumen/watt terms can offer very different lux/watt features.

The notion of lux/Watt thus permits lighting solutions to be compared on a given project by defining an objective on a defined zone, without needing the notion of surface area.

To generalize our thinking and permit lights to be compared in absolute terms, without first defining an illuminated surface, of course the unit lux.m²/W must be used. The larger the lux.m²/W number, the better the spotlight. In which case, we are no longer talking about the performance of the installation but about the performance of the spotlight.

With its wide range of lenses and its ability to optimize lighting for every project, LEC focuses on making the best use of lux per watt. A striking example is the facade of Istres City Hall by Atelier Roland Jéol. Only nine, 4-colour, 80W, linear in-ground recessed spotlights are used to illuminate 82m of contemporary architecture by Paulo Dias and Michel Vallière of the architectural firm Atrium. 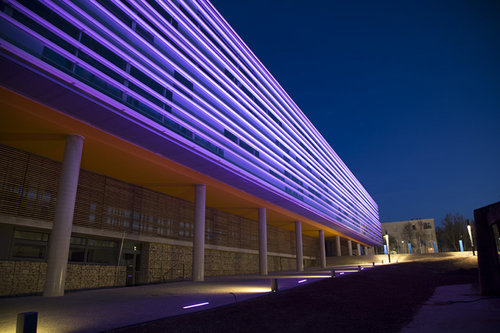 Another striking example is the path lighting, where our 6430 terminals use less than 100W to illuminate 100m of disabled access.

Lumens-per-watt measure the efficiency of sources, but not the efficiency of users.
By analogy, the most efficient radiators allow major reductions in power consumption compared to traditional technology, but if the building is poorly insulated, heat escapes uselessly to outdoors. Maximizing lux-per-watt marks a real desire to reduce energy bills, because the best way to save it is to not use it. A lighting project must therefore be considered in its entirety, taking into account its entire ultimate bill. 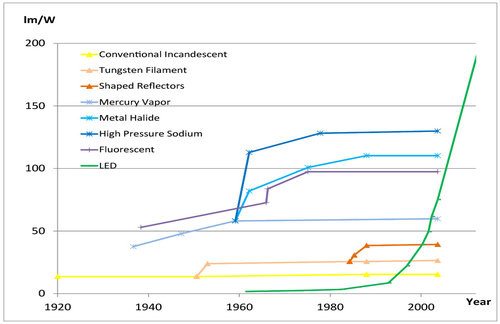